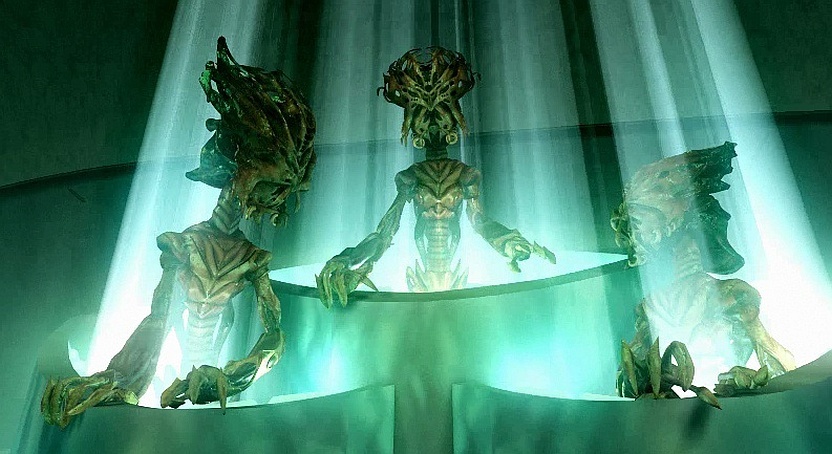 As a story is told and retold over the course of generations, no matter the attention paid to detail and no matter the importance of the tale, the truth is gradually nibbled away by little mistakes and innocent exaggerations. Carried off on these well-intentioned, tiny feet, the facts deteriorate softly and painlessly into a condition generally referred to as “shrouded by time.”

The legends concerning the Orions and Antarans are shrouded by time.

What is certain is that at one time both races coexisted in the galaxy. The scope of their power and technical advancement has surely been enhanced by hyperbole, but that they were far superior to anything now known is indisputable. Perhaps it was inevitable that two such behemoths meet in violence. The legends paint the Antarans as ruthless, xenophobic killers, but we all know that history is written by the victors.

The Orion-Antaran war was a protracted holocaust of galactic proportions. While we can never know if they truly flung entire star systems across deep space as weapons (as the storytellers claim), our astrophysicists have uncovered evidence of directed energy bursts the power of which staggers the imagination. That both races had the ability to raze planets no one contests.

The Orions eventually defeated the Antarans.

Rather than exterminating the race, as the stories claim the Antarans would certainly have done, the Orions chose to imprison their enemies in a “pocket dimension” — a volume the size of a single star system, formed and carved somehow out of the fabric of space-time — using a “dimensional portal”. Physicists to this day puzzle over the theory and the technique, but the result was obvious; the Antarans were banished one and all from this dimension.

At this point, even the storytellers admit that the legends become vague. Some time after the war, the Orion race inexplicably disappeared. They left only two legacies for the galaxy’s future inhabitants. One was the tales of their power and legends of the Antaran war; the other is the Orion system itself. One planet circles this star, and it is reputed to be the original home world of the Orion race. Despite the incredible potential this abandoned world must hold, no one has yet plundered or colonized it. The reason for this is that the system is only uninhabited, not undefended. The Orions left a single Guardian to protect their home. Perhaps they intend to return some day.

Perhaps the Antarans intend to return, too.